“Space and Time are the framework within which the mind is constrained to construct its experience of reality.”
Immanuel Kant

I would say, so is the body, but that’s quibbling with Kant.

The second hardest concept to reach beyond is our standard notion of the Time/Space dualism delusion. (We will tackle the first hardest concept after we’ve absorbed the Tetrahedron.)

What is hardest about Time/Space is not simply overcoming the notions of past, present, future during our travels. It’s also reaching beyond a very earthly and neural construct: Cause and Effect. The apparently obvious pull of the string, the release of the arrow, the arrival at the target, the unfolding sequence of seemingly linear events seem completely natural and indisputable, right?

Well… did you know that in light there is no time? From light’s perspective, it is all, and only, Now.

Though made of light and sound we wear bone and flesh, and we experience time—or filter, and “construct” our experience/reality— through the appearance of time. But there really is only Now, the gift of the present.

In many ways, the illusion of time is merely delay. Of physically processing the perception. Or of manifesting the desire.

The time it takes for a thought/emotion to bear its fruit during this Earth Experience can be slow, painfully slow—for good and bad events/outcomes. Very rarely is Karma instant. The connection between the cause and the effect is often so delayed that as lessons in materialization the lessons go  unrealized. Usually people forget they shot the arrow, and then balk at the consequences of the target hit (the arrow is usually a boomerang arrow and the target is often the self).

We will come back to this near the end of The Core Material but it is essential to understanding the Earth Experience.

This blog is entirely about this:

But very often we forget our authorship, and the roles we choose to play in the play. The often slow unfolding of cause and effect on this planet is actually meant to protect us, and of course is meant to teach many valuable lessons, but it allows all sorts of aberrational behavior. It allows in all sorts of excuses and finger-pointing. It is part and parcel of the concept of dualism and an especially insidious concept: the (Evil) Other.

But this cause/effect discussion is only prelude to introducing something way bigger (but necessary to unfold the entire Tetrahedron). Let’s move on from overcoming cause and effect/time and space (for now) and go into a more unique room and play with a new What If?… for the rest of this post.

If you remember, I showed you that a life “line” actually extends in both directions.

I used the word Pre-incarnation to describe the concept of existing before this life. And the picture is admittedly linear. But to keep it simple we will stay linear for the next several pictures.

There is also the concept, widely held, of re-incarnation—other lives before or after any given life (let’s just say they are all human lives because transmigration gets weird).

That standard notion, so quaint, of reincarnation could be depicted like this:

Here we see three lives, one after the other after the other, with some time in between death and the next birth. The standard conception (Reincarnation_Linear) also assumes this is the same person/identity/soul in all three lives.

This is super simplified but here is the WhatIf?… Let’s say there are, in fact, three lives, at different places and times in history, but instead of those lives occurring separately in a sequence, what if… 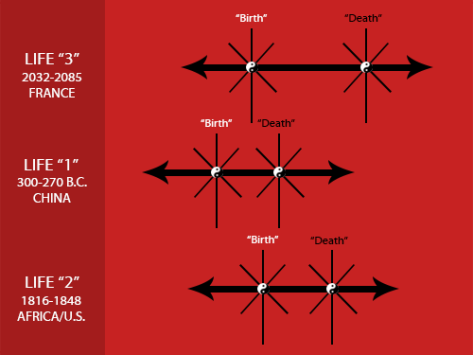 …those lives are occurring together, more or less simultaneously, as are those eras and places (Reincarnation_Simultaneous)?

This gets super complicated super fast. But here’s an easy way to start think about it, and we’ll leave you with just this concept until the next post.

Picture a radio or cable television or even the internet. No matter what station, channel, page to which you are “tuned,” all the other frequencies, programs, pages are still existing and going on right Now. Picture each song or story or post as a life, and while you are following the story of one life, an infinite number of other lives, and other alternate/parallel/probable lives are “playing.”

Or think of an apartment building, a high-rise with many floors and each floor is a different century and a different country and the people living in those apartments are all you—while you live in the apartment of this day in history in your place on Earth.

And here is the twist, using whichever analogy you want: the “past” is still occurring, as is the “future,” because there is only Now, a Really spacious Present.

We think the past is past, the present fleeting, and the future arrives and is gone. Well, maybe, perhaps, there is no separation of cause and effect, eternally.

We already know cause is implied in effect, but—and this returns us to the Choice? Chance? Bashert? post—maybe we would understand the really hard questions about life/story/reality better if we knew that no moment is lost and every moment is greatly enriched by the deeply shared experience of multiple lives in an infinite web of choices amid limitless, yet unpredictable, possibilities. Just a little something to ponder.

(Take a moment to “tune into” your invisible younger self and tell it something nice, then do it to the present self who that younger self became, and then stretch out to the future you and tell you you’ll see it soon.) 🙂

Getting back to our pictures, those three “reincarnational” lives, defined by their births and deaths could be seen linearly:

But any particular life could be better depicted by a 3D spiral, because we consistently return to themes and issues, don’t we? And I like to think of each life story as a “cloud” that is part of much larger cloud “Entities,” which I will explain later. But for now let’s just take those simple three lives and entwine them in the now and leave it at that—for now.

Born knowing. Been testing the evidence. Holding onto Wonder against all odds. SEE THE REST UNDER "My Bio (very brief)."

Email me at: whatifcmichael at gmail.com